Each year we have sheep come to Headon Farm for the winter. They belong to a farmer friend of ours who doesn’t have enough space on his own farm for all his sheep to graze. They arrive around October/November time and usually leave February/March the following year when the farmer takes them back to his own farm for them to have their lambs.  Sometimes we are lucky and the ewes will have their lambs early we see some little white ‘dots’ in the field!  If this happens we let the farmer know and he picks them up and takes them home for some TLC. 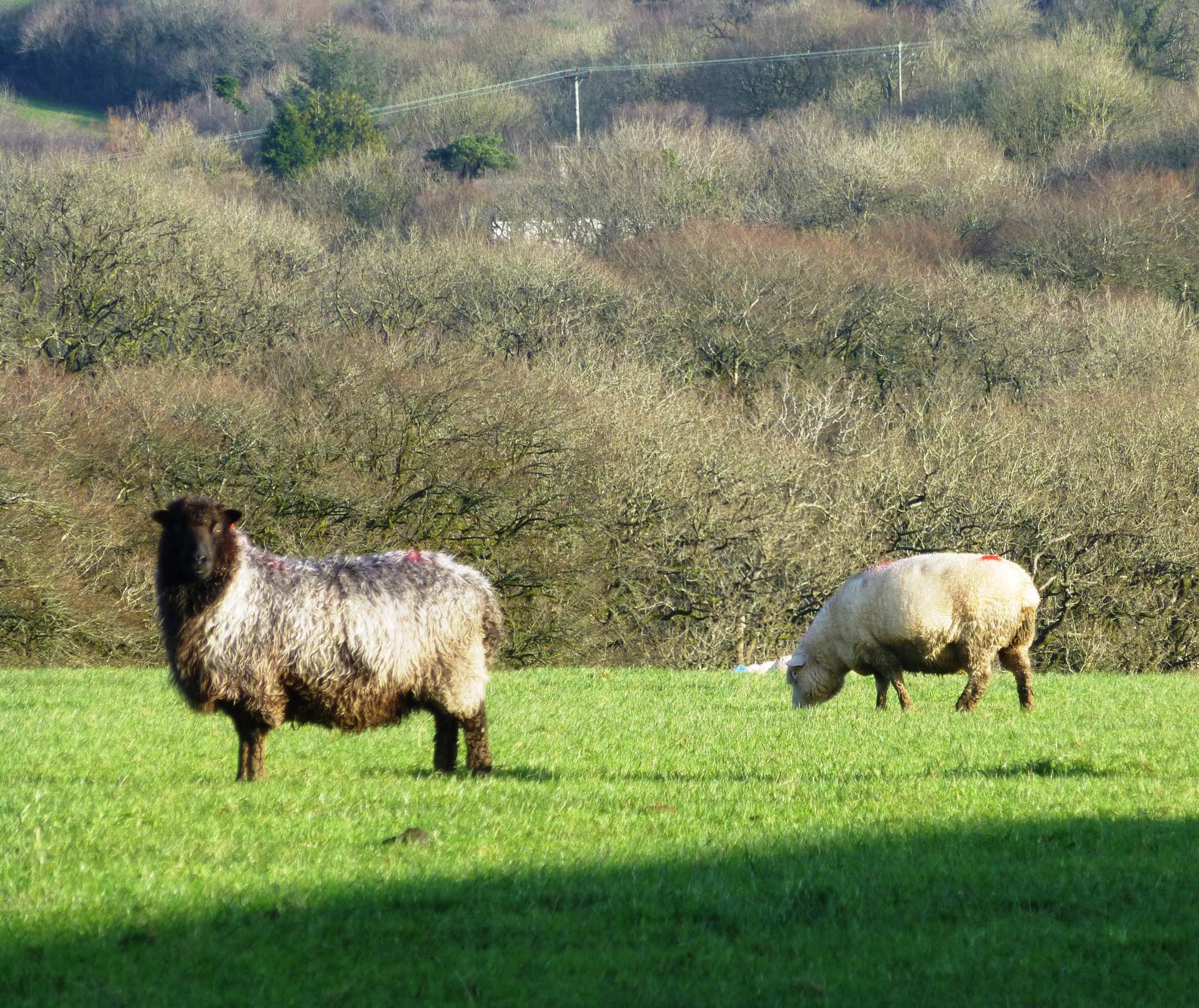 Having sheep on our farm is good for the land as they fertilise as they go!  They also eat the grass much closer to the ground than cattle.  This make the grass plant shoot lower down making a much stronger sward of grass.

Keep your eyes open as you walk the quiet lanes from our caravan touring site, you may see some baby lambs!  (If you do can you let us know please)! 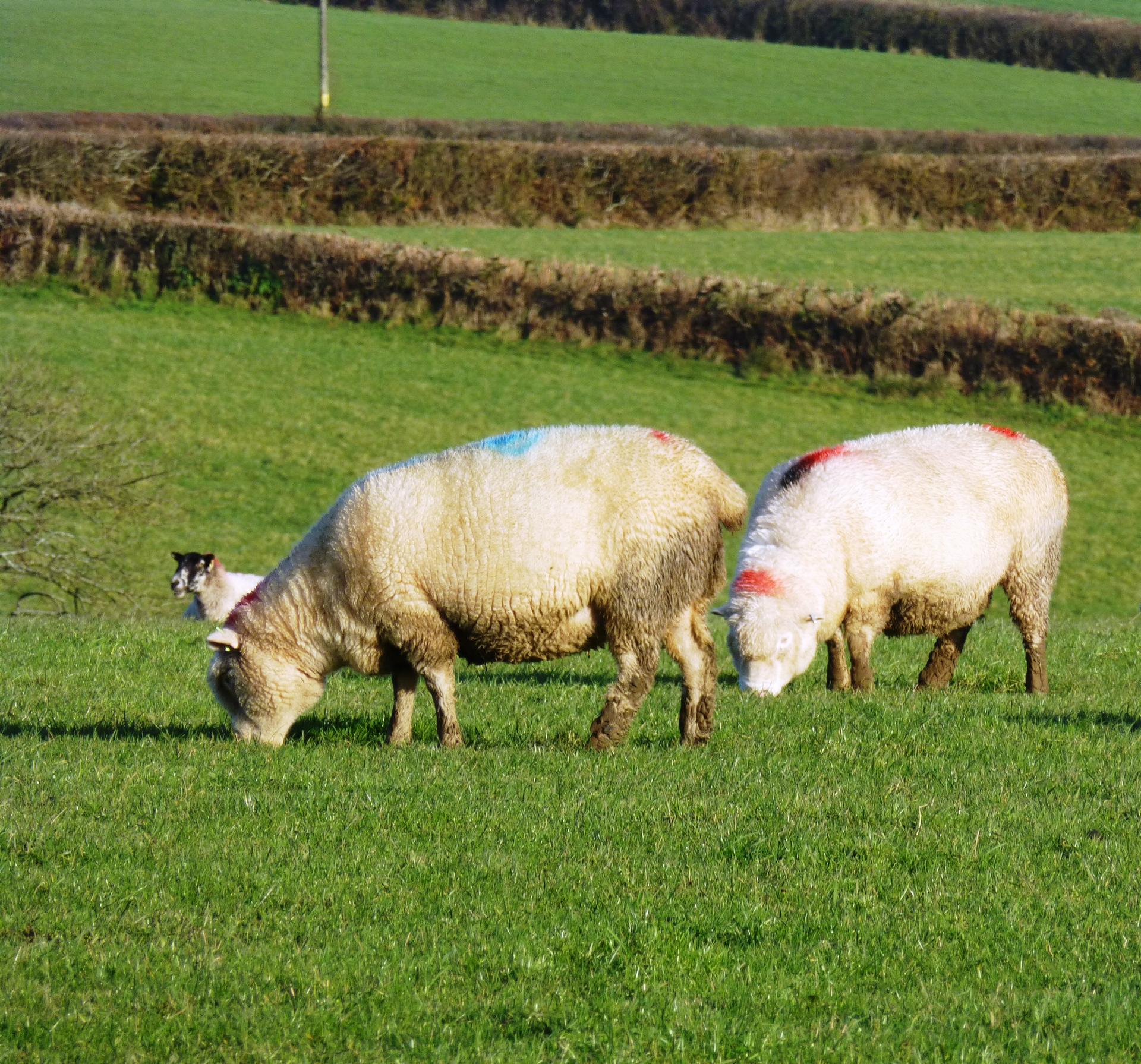 Since our last update earlier this year there has been much happening on the Farm.  Following the long wet Spring causing a lack of feed and bedding, it seemed the Country was blessed with a hot period early Summer.  However, the temperatures soared and the hot weather then caused its own difficulties as the grass didn’t grow due to the lack of rain.  Here in north Devon we fared better than most as we farm on clay which holds moisture so our grass never scorched.  Many of the visitors to our caravan touring site here on the Farm were amazed to see green grass pitches as everything was brown in their home towns.  One of our calves even has sunburn to his ears and we had to apply sunscreen!

The combination of a long winter/spring and then an extreme dry spell has made the feed situation on farms short throughout the country.  It will be a challenging winter for many as some farmers had to feed their winter rations in the summer to keep their cattle going.  More on this subject later…!

If you have read our previous diary you will know that we were under a cattle movement restriction due to an inconclusive TB reading.  As you can imagine, it is a nerve-racking time each time the vet arrives into the yard and then commences his testing.  The test is performed over two visits.  The first visit the vet clips the hair on the side of the neck of the cattle and makes two injections.  It is the second visit a few days later that is crucial.  If the cattle have reacted to the vaccine then it forms a lump.  This lump is measured, if it fall outside the parameter the animal is either inconclusive (and tested again) or a reactor.  During this second visit everything is crossed and is usually a fairly quiet time as we await each cow’s reading.  Bovine TB is prevalent in our part of the world and we have been very lucky never to have had a reactor, only an inconclusive reading.  Two inconclusive readings are enough to ‘shut you down’ from any movements and this is what happened to us. Thankfully, we went on to have two clear tests, which is what is required before the restriction could be lifted.

Once we were able to sell our cattle we took our 24 ever growing yearlings to Exeter Market and were delighted to top the market that week! (For the second year running!) Richard had spent a great deal of time with these calves and it paid off as they were very quiet in the ring which is what buyers like to see. 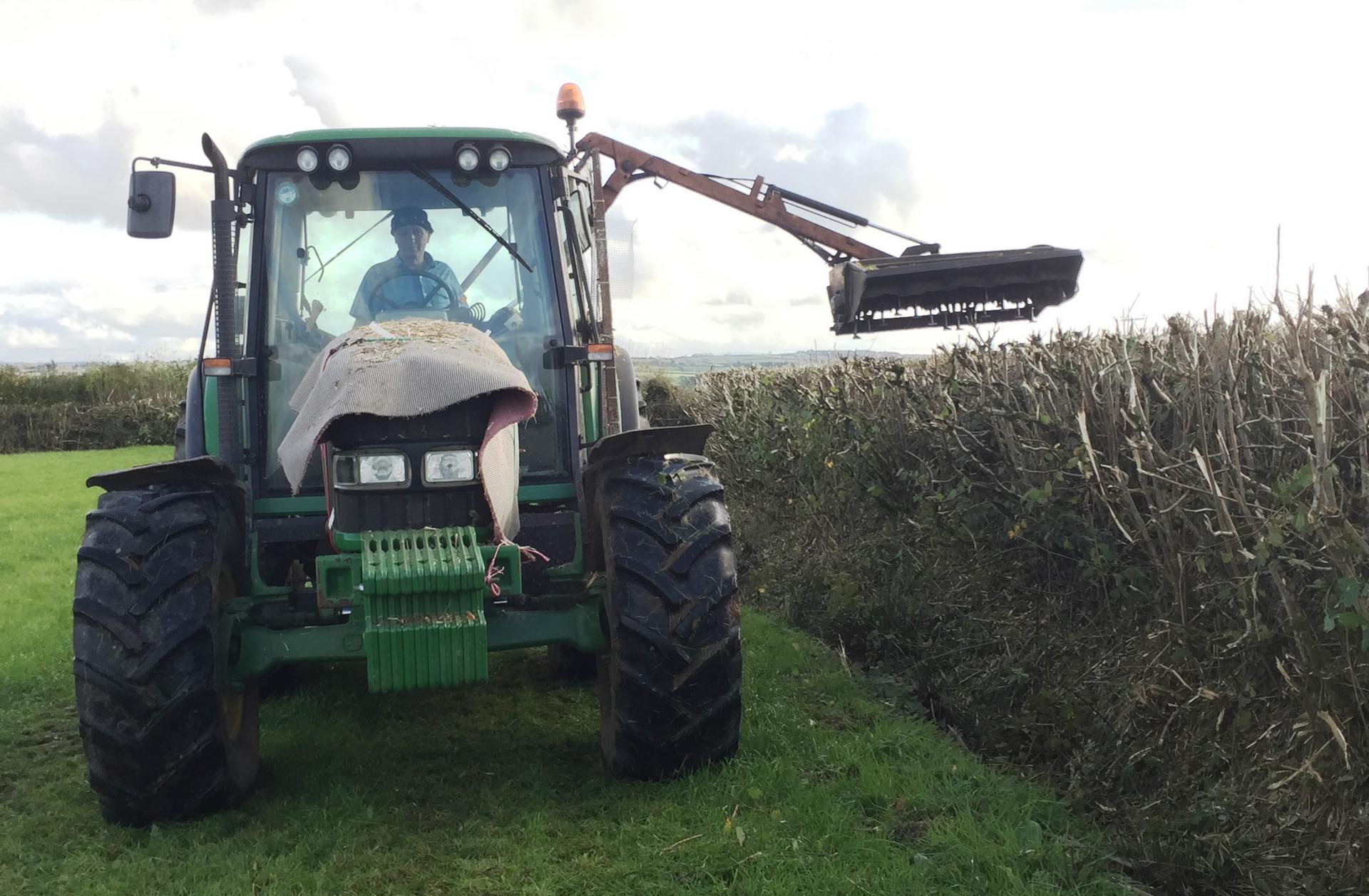 During the time we spent on TB movement restriction we had to make the hard decision that sadly the beef herd at Headon Farm was not commercial enough.  Events such as the herd fertility, weather and TB have a huge impact on a small herd such as ours.  To sustain even one of these challenges would be difficult but all three were impossible.  It is a chapter that has closed in the life of Headon Farm but gives the opportunity for another to open.  Watch this space!

We were pleased to sell the remainder of the cows and calves as one group to a local farmer who we knew would look after them.

Now then, going back to the national feed situation on farms!  As we had no cattle after July we took the opportunity to make as many silage bales as we could (the big black wrapped bales you will see if you go for a walk down the lane from the caravan touring site).  We will be selling them to farmers who are short of feed throughout the winter.  There’s always a silver lining of you look!

We have had a wonderfully dry autumn so far and Richard has been busy cutting the hedges on the farm.   Many farmers don’t bother as there isn’t a return on the time and expense of doing this but we like to make sure this job is done each year as it makes the farm look tidy.  In addition to this, it ensures the hedge thickens out at the base and this acts as better stock proofing.

Long may this dry spell continue!

You just never know what will happen at Headon Farm!  A few weeks ago one of the fields on our Farm was the unscheduled landing spot for a hot air balloon trip!  Richard was out in the fields in his tractor and called me to say there is a balloon in a field and to come out and join him.  I never imagined that it has actually landed with a dozen passengers on our Farm!  The deflated balloon on the ground is absolutely massive!  It wasn’t long before the following Land Rovers turned up to collect the swiftly packed away hot air balloon, basket and passengers.  As they left we mentioned if ever they needed somewhere to take off from let us know. 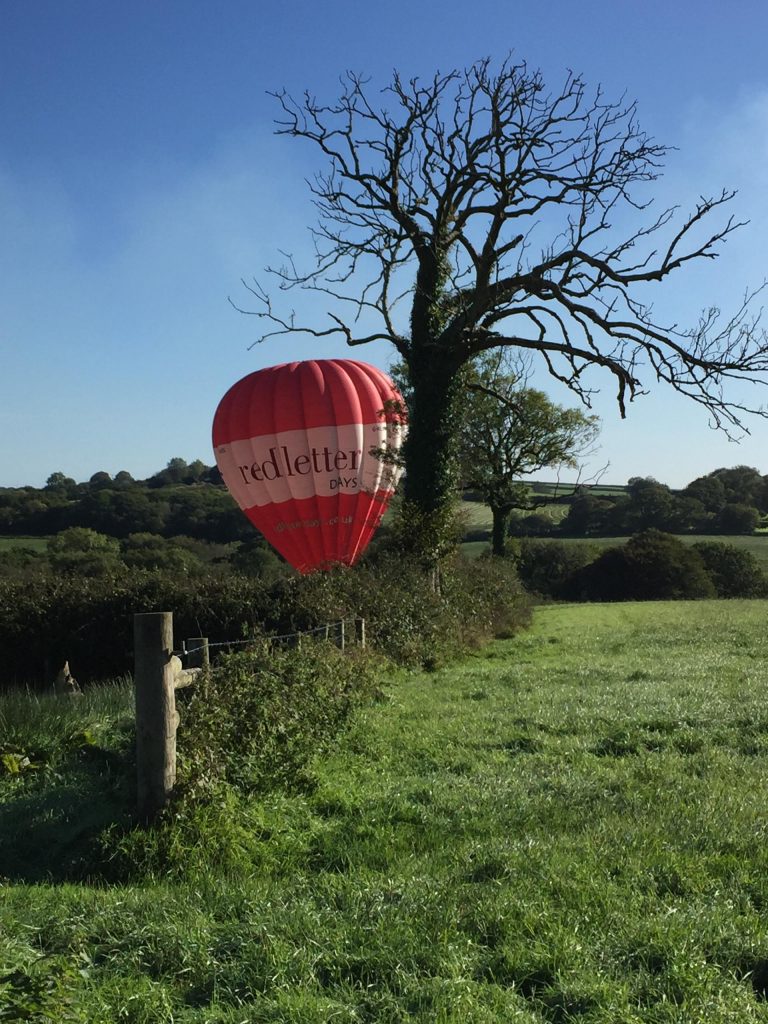 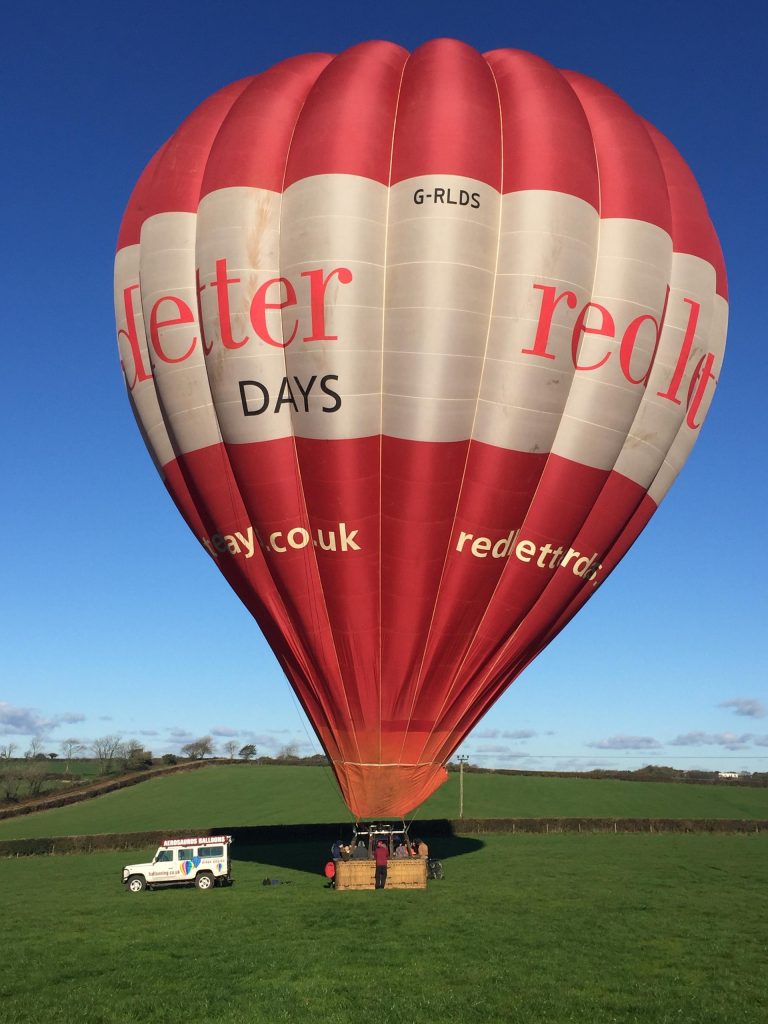 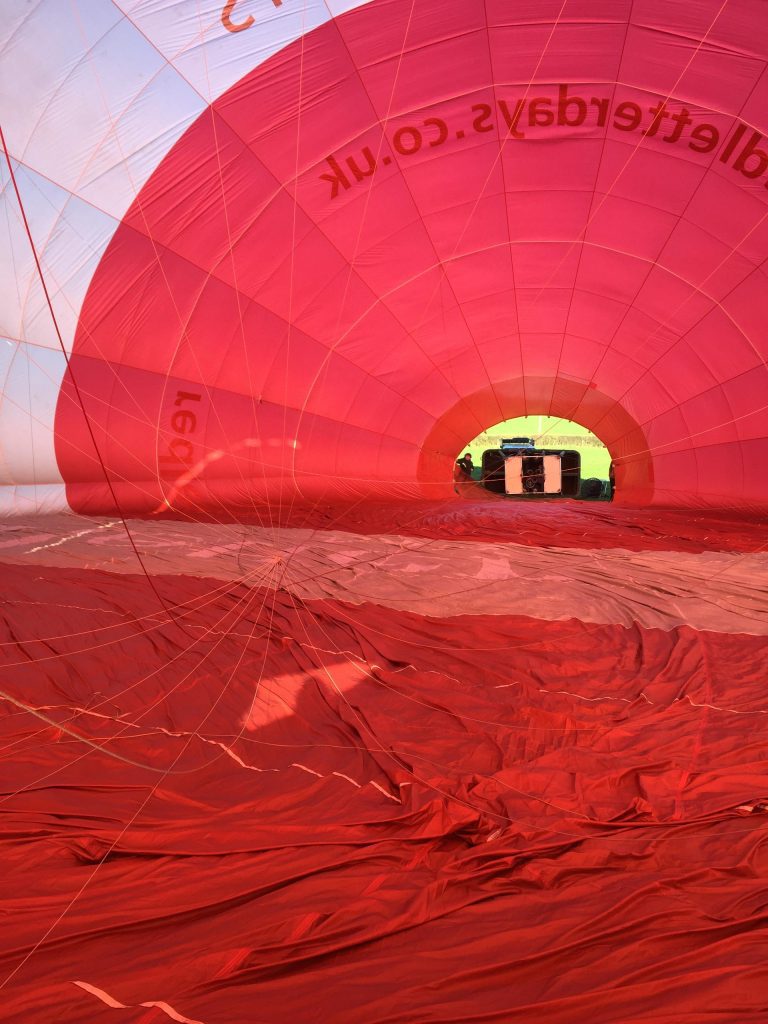 Early one morning this week we received a call from the hot air balloon pilot – could they come to us within the next 20 minutes to take off!!  The hot air balloon was due to depart from the Exeter area but it was too windy and we had the perfect conditions for a flight from Headon Farm.  Shortly after they arrived we chose an open field to fly from which happened to be right next to our caravan touring site.  It was hands-on with everyone helping to unfurl the balloon and soon once everything was ready it was Up, Up and Away!! The balloon flew right over the top of our caravan storage shed and was heading for Lifton, Devon.

For our clients staying in their caravans it was a remarkable sight to wake up to!

This website uses cookies to improve your experience while you navigate through the website. Out of these, the cookies that are categorized as necessary are stored on your browser as they are essential for the working of basic functionalities of the website. We also use third-party cookies that help us analyze and understand how you use this website. These cookies will be stored in your browser only with your consent. You also have the option to opt-out of these cookies. But opting out of some of these cookies may affect your browsing experience.
Necessary Always Enabled
Necessary cookies are absolutely essential for the website to function properly. This category only includes cookies that ensures basic functionalities and security features of the website. These cookies do not store any personal information.
Non-necessary
Any cookies that may not be particularly necessary for the website to function and is used specifically to collect user personal data via analytics, ads, other embedded contents are termed as non-necessary cookies. It is mandatory to procure user consent prior to running these cookies on your website.
SAVE & ACCEPT